In those days, real estate losses could be deducted 100% against other income and was thus very popular. But to get it right, there was a trick to structuring the investment so that the right combination of cash flows, tax losses, and equity build resulted in maximum return on investment. As it turned out, few accountants were versed in this matter and thus, the firm was started. 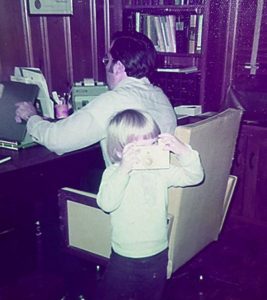 Tom and Patrick in the first TLA office, 1974

During the 1970’s and 1980’s, the firm grew through its work on real estate matters, gained individual clients as well as businesses, some of which were not real estate related. In the mid 1980’s Congress changed the tax laws governing real estate tax losses and came up with the so-called “passive activity” rule to quell the abuses that were going on in some of the publicly held real estate investment activities. And thus the real estate party was over. At this point the attorneys decided that Multiplex should terminate and it did.

In the late 1980’s and early 1990’s, Mr. Lewis decided to start marketing into other segments beyond real estate. So he started doing more public speaking, usually on real estate topics, as real estate had changed, but it was not dead. The firm had success in helping small business clients get their books on the “computer,” the latest gadget. For a while, technology involving computerized accounting and income tax preparation seemed to change daily.

The 1990’s – The Advancement of Technology

The firm became “Lewis & Kraemer, P.A.” incorporating the name of the other CPA working for the firm at the time. The firm was also office sharing with another CPA by the name of Roman Konezny and for a while, in the 1980’s, practiced as “Lewis & Konezny”, an informal partnership. In 1995 Mr. Konezny passed away suddenly with no succession plan. Consequently, the firm worked out a purchase of his business with his widow. Shortly before that time, Ms. Kraemer left the firm and the name was changed to “Thomas Lewis & Associates, P.A.”.

The accounting business was changing rapidly. In the late 1990’s and early 2000’s, QuickBooks became the “go-to” software for many small businesses and so the firm began a training program to help clients deal with this new technology.

The firm made additional acquisitions of two small accounting firms. The Firm saw that the non-profit sector seemed to be underserved by smaller, less expensive CPA firms and since many of the non-profits are in the St. Paul area, it was decided to open an office there in the Cleveland avenue area. At the same time, the firm was in pursuit of another CPA and found one with a book of business. As the firm continued to grow, Patrick Lewis became an additional shareholder thereby increasing his interest and responsibilities in the firm.

The firm bought another small firm from a gentleman, Cal Swenson, a long-time tax preparer who had just turned 85. The transition went smooth and was good fit for all parties involved.

One of TLA’s specialties is helping small businesses to work with QuickBooks. It can do many things and most only need to know a very few. For most, what the “few” is they have to know is the mystery. Mr. Thomas Lewis himself got a Masters in taxation several years ago and now he focuses on mostly IRS problems, tax planning and compliance.

Our people love helping clients and that is what we do best, whether it be accounting or income tax problems.